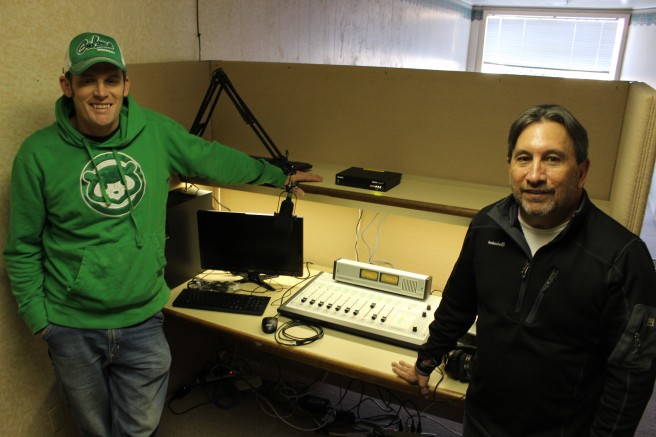 “Community Radio” was a term used several times by Robert Walker the new owner of radio station WQUD located at 105.5 on the FM dial in Erie. The new station went on the air several months ago playing automated music exclusively with no commercials. All that is about to change for the better.  The station plans to go “live” on Monday morning at 7:00a.m. with local news and information including drawings and giveaways. 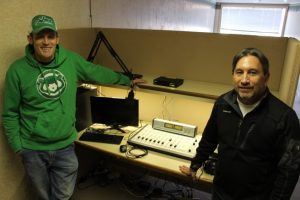 Erie resident Aaron Dail is the new general manager of the FM station. Dail has an eclectic background in media including stints writing sports for the Moline Dispatch and working as an overnight DJ on radio station 97 X in the Quad Cities as well as editing the Erie Tribune on Facebook. He also runs a small construction company in Erie. “This is something I have always wanted to do,” he said.

For now Dail will be a one-man-band as he will be the on-air host, sales manager, and do-everything guy. Initially Dail has the station promoting a fundraiser for the Veterans of Whiteside County. They are sponsoring an aluminum collection drive asking people to drop off items at a collection site located across from Casey’s on Route 2 in Erie.

When asked, “Why Erie?’, owner Robert Walker said it is an untapped radio market. Walker who is from Texas has an extensive background in broadcast ownership. At one time he was involved in 32 radio stations. He also had an interest in television including ownership of a station on the Texas – Mexican border.

Walker said the FCC (Federal Communications Commission) began a process in the early 2000’s to find areas in the United States were new radio signals could be transmitted without interfering with established signals. Walker likens it to a very complicated puzzle involving signal frequencies and strength in which the FCC finds space available and then auctions it off. Walker has made a living over the past several years buying such frequency space.

The station with its transmitter located at the corner of Star Road and Short Road just north of Erie will cover an area from Freeport to Kewanee and from Amboy to Durant, Iowa. That area includes almost 450,000 potential listeners.

The format of the station is called ”Vintage Radio” and includes music, ”That ranges from Johnny Cash to the Beatles.” The station currently is fully automated and run from a small studio located at 910 Albany Road in the Miller Real Estate Building on the triangle in downtown Erie. With today’s current technology the equipment needed to put a radio station on the air is surprisingly small and sparse. Walker says additional equipment will be installed this month and that all of it will be “First class.”

The station’s playlist includes over 2,000 songs compared to tightly formatted stations who use only a few hundred titles. ” The community side of it is what makes us unique,” said Walker. The new push in radio is to operate in smaller communities. “I am a big believer in community radio and the reward will come.”

The station can be contacted at wqudvintageradio@gmail.com for additional information and advertising information. “We are just going to have fun with it,” said Walker. Other additional future plans are undetermined, but Dail’s love of high school sports will probably lead to live local high school game broadcasts.